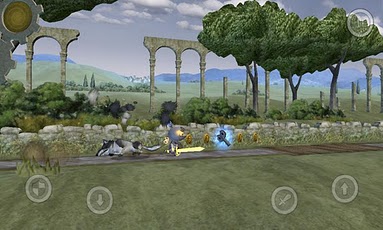 Wind-up Knight is a lot of things, but at its core it’s an old school side-scroller with a simplistic control scheme. When you start a level, the knight starts going and you’ll be able to jump over obstacles and collect coins and keys. Both are important as the keys are actually wind-up keys that keep you going, and the coins are used to buy upgrades from the shop. As the game progresses you’re given other buttons like attack and roll which changes the game up a bit and increases the difficulty. Wind-up Knight isn’t an easy game at all, especially at the higher levels which is great for hardcore gamers. The game does a good job of getting you used to the controls before blasting you with some very difficult levels.

Wind-up Knight’s levels are actually housed in story books; each book has 12 levels and there are three books (worlds) in all. You get the first book for free, and the other three worlds can be unlocked if you’re good enough earn enough notes. If you don’t have the dogged determination required to unlock the rest of the books, you can purchase them through the in-app system for $1.99 a piece. You can also buy around 30 different items with “notes” through their online store including better shields, swords, armor, and helms. The game itself is free to download, but there is a lot of in-app purchasing going on in Wind-up Knight.

Overall, Robot Invader did a great job with Wind-up Knight as it’s a very polished action-adventure game that requires fast reflexes and a keen eye. The gameplay gets pretty intense, the graphics are excellent, and the music is great as well. The only knock I have on the game is with the in-app setup and paying 2 bucks for each new world. I’m not saying it’s not worth it, I’m just telling you that only the first book/world is actually free. That being said, Wind-up Knight is still an awesome game that everyone should check out, and you can pick it up in the Android market.