When the Amazon App Market first appeared, their whole marketing ploy was to give “a free app everyday” and they’ve kept to their word ever since. They’ve put some great apps out for free since they opened, but the one problem I’ve had along with countless other people is forgetting to check the app market on a daily basis to see what the free app is. I decided yesterday from here on out, if it’s a good game or app I’m going to feature it and Helium Boy from Bertil Hörberg certainly fits the bill. 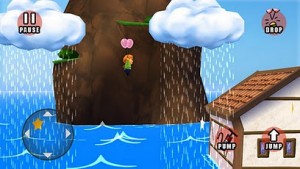 Getting around in Helium Boy’s 3D stages is done mainly by balloons, but you’re going to have to walk and jump as well. Button-wise you’ve got your standard d-pad, along with the pump, dump, and drop buttons. You’ll want to walk around the levels collecting stars while avoid baddies like Ninjas, birds, and the water of course. That being said, your main mode of transportation will be balloons and you’ll have to use and drop them at just the right time to make it to the end of each level. You can only use two balloons at once, and if you pop one or decide to drop you’ll have to be on the ground before you can pump another one up. The whole combination of walking, jumping, pumping new balloons, flying and dropping can be a little tricky to master at first, but once you have the hang of it you’ll be zipping around the levels like a champ.

There are 8 different stages and two modes of play in Helium Boy with Normal and Beginner modes. Beginner Mode is highly recommended if you’re new to the game as you can go through the levels at your own pace while Normal mode ups the ante by having the screen automatically move forward. Helium Boy can be played with the onscreen control pad, a hardware keyboard or an external gamepad. The addition of gamepad support is a nice touch as Android gaming has progressed and tablets are getting more popular you’re going to see more gamepad & Zeemote support.

Helium Boy is a game I heard about awhile back, but just never got around to playing. Thanks to Amazon’s free app of the day, I finally got to give it a run and I’m glad I did. Developer Bertil Hörberg made an Android game that’s got great style and a pretty awesome control scheme. If the game seems a little easy at first, just try Normal mode as the screen moving forward at a constant rate definitely increases the difficulty. Overall, Helium Boy is a great little 3D Platformer that’s well worth checking out. If you’d like to give it a go, head on over to the Amazon market and pick it up for free while you can! If you miss out or can’t use Amazon, you can grab it for $1.99 in the Android market.