Overkill is a new Android game from Craneballs Studios makers of popular game SuperRope. The studios new game is a total 360 from their last one as Overkill is an intense Android shooter that digs its claws in deep your first time through. Seriously… this is one addicting shooter that you’ll want to check out. 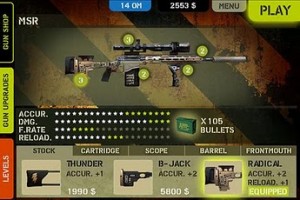 The premise of Overkill is that you’re a mercenary on a mission to kill anything in your way, and you’re going to have plenty of help from some bad ass guns to help you out. Before we get to the weapons we’ve gotta’ touch base on the controls. Playing Overkill is simple; you use one finger to pan/aim and the other to shoot and reload. It’s pretty much the standard setup for a lot of shooters and is very easy to use. You’ll take on your enemies on 5 different battlefields, and each of these battlefields has 20 different waves that get tougher as you progress. If you manage to make it through the onslaught you’ll be rewarded with a “Hell Wave” and I can tell you firsthand that Hellish is a good way to describe that one. The guys at Craneballs were nice enough to include a few handy options between waves to help us out though with the ability to buy more ammo or save and upgrade your gear.

For each and every enemy killed you’ll receive cash and XP; when you get enough XP you’ll level up and get something called an Overkill Medal. The medals (along with the cash) are used to upgrade your weapons, and you’ve got a lot of options to choose from in that department. You’ll get 14 different weapons in Overkill and there are some great ones to be had like the M4, MP7, HK 417, and the P90 just to name a few. The guns themselves are cool and all, but the real wow factor for me was with the upgrades. Each gun has stats that can be raised through the upgrades menu. Every piece you add alters your gun’s appearance, and there are five areas you can improve with the stock, cartridge, scope, barrel, and frontmouth. You can really trick your guns out and add a slew of different options from grenade launchers and scopes to extended mags; there are a lot of options for every gun. They did include the in-app purchase / credit system, but it’s not bad in this one. The better weapons don’t require an extreme amount of medals to get; I was able to get enough OM Medals to get my dream gun by doing two free offers (game downloads) through Tapjoy.

I honestly have nothing bad to say about Overkill or any “nitpicking” to do as it’s been a blast to play, and I’m still playing it 2 weeks later. The graphics are good, the enemies are tricky, and you get to customize weapons to your hearts content. I also like the fact that you can save in-between waves which really added a nice quick-play feel to the game. It’s great to be able to blast the enemy to bits for 20 minutes, save the game and go back to the real world for awhile. Craneballs Studios did a great job with the game, and I highly recommended you check it out if ya’ dig shooters. Hit the button below to get Overkill from the market for free.